Define happiness, someone asked me recently. Absorption, I said instantly (it was an e-mail interview), and anything that gives me an inner life and a sense of spaciousness, intimacy and silence. The world is much better for many of us now than it was 10 years ago, and I never could have dreamed so many of us would have so many kinds of diversion, excitement and information at our fingertips.

But information cannot teach the use of information. And diversion doesn’t teach us concentration. Imagine a seven-hour-long heart-to-heart with someone who’s been saving up all her life for what she’s about to whisper in your ear. The medium that has been dying the whole century may be one way we can rebel against the hidden dictatorship of Right Now.

— Pico Iyer, on the tyranny of the moment (and why books may still be useful after all)

I was walking home listening to the amazing Esperanza Spalding on a recent episode of the Wait, Wait… Don’t Tell Me! podcast (start at 20:00). She made double entendres about playing bass. She talked about how she started out playing the violin, and then tells us how she found her way to her one true love:

Esperanza: “When I saw that bass, I [knew] that’s what I wanted the whole time.”

P: “What drew you to playing the bass?”

Esperanza: “Nothing that I can recall. But the sound is tremendous, you know, it sits on your hip bone, and it vibrates your skeleton, and it’s like, kind of musically orgasmic. It’s incredible, I have to confess… It’s purely for self-interest of pleasure.”

Esperanza: “I can start a hotline where people can call in and we talk about jazz…”

I found my way online and saw her recommendation to listen to James Baldwin’s The Artist’s Struggle for Integrity. The reading brought a lump to my throat. I couldn’t find the complete transcription online (outside of reading The Cross of Redemption available on Google Books), so for kicks, since I have to work hard to maintain my fast typing speed from the days of 10 simultaneous AOL chat windows and Mavis Beacon games, I typed out an excerpt that I found particularly compelling.

And yet, one is compelled to recognize that all these imprecise words are kind of attempts made by us all to get to something which is real and which lives behind the words. Whether I like it or not, for example, and no matter what I call myself, I suppose the only word for me when the chips are down is that I AM an artist.

The terrible thing is that all these words, the reality behind them, depend on choices one has got to make forever and ever and ever, every day.

I am not interested really in talking to you as an artist.

It seems to me, that the artist’s struggle for his integrity is a kind of metaphor, must be considered as a metaphor for the struggle, which is universal and daily, of all human beings on the face of this terrifying globe to get to become human beings.

It is not your fault, it is not my fault, that I write. I would never come before you in the position of a complainant for doing something that I must do.

What we might get at this evening, if we are lucky, if the mic doesn’t fail, if my voice holds out, if you ask me questions, is what the importance of this effort is.

It would seem to me that, however arrogant this may sound, I want to suggest two propositions.

The first one is, that the poets, by which I mean all artists, are finally the only people who know the truth about us. Soldiers don’t. Statesmen don’t. Priests don’t. Union leaders don’t. Only poets. That’s my first proposition. We know about the Oedipus complex not because of Freud but because of a poet who lived in Greece thousands of years ago. And what he said then about what it was like to be alive is still true, in spite of the fact that now we can get to Greece in something like five hours and then it would have taken I don’t know how long a time.

The second proposition is really what I want to get at tonight. And it sounds mystical, I think, in a country like ours, and at a time like this when something awful is happening to a civilization, when it ceases to produce poets, and, what is even more crucial, when it ceases in any way whatever to believe in the report that only the poets can make. Conrad told us a long time ago (I think it was in “Victory,” but I might be wrong about that): “Woe to that man who does not put his trust in life.” Henry James said, “Live, live all you can. It’s a mistake not to.” And Shakespeare said — and this is what I take to be the truth about everybody’s life all of the time — “Out of this nettle, danger, we pluck this flower, safety.” Art is here to prove, and to help one bear, the fact that all safety is an illusion.

“Talent is insignificant. I know a lot of talented ruins. Beyond talent lie all the usual words: discipline, love, luck, but most of all, endurance.”

“You’re playing the game according to somebody else’s rules, and you can’t win until you understand the rules and step out of that particular game, which is not, after all, worth playing.” 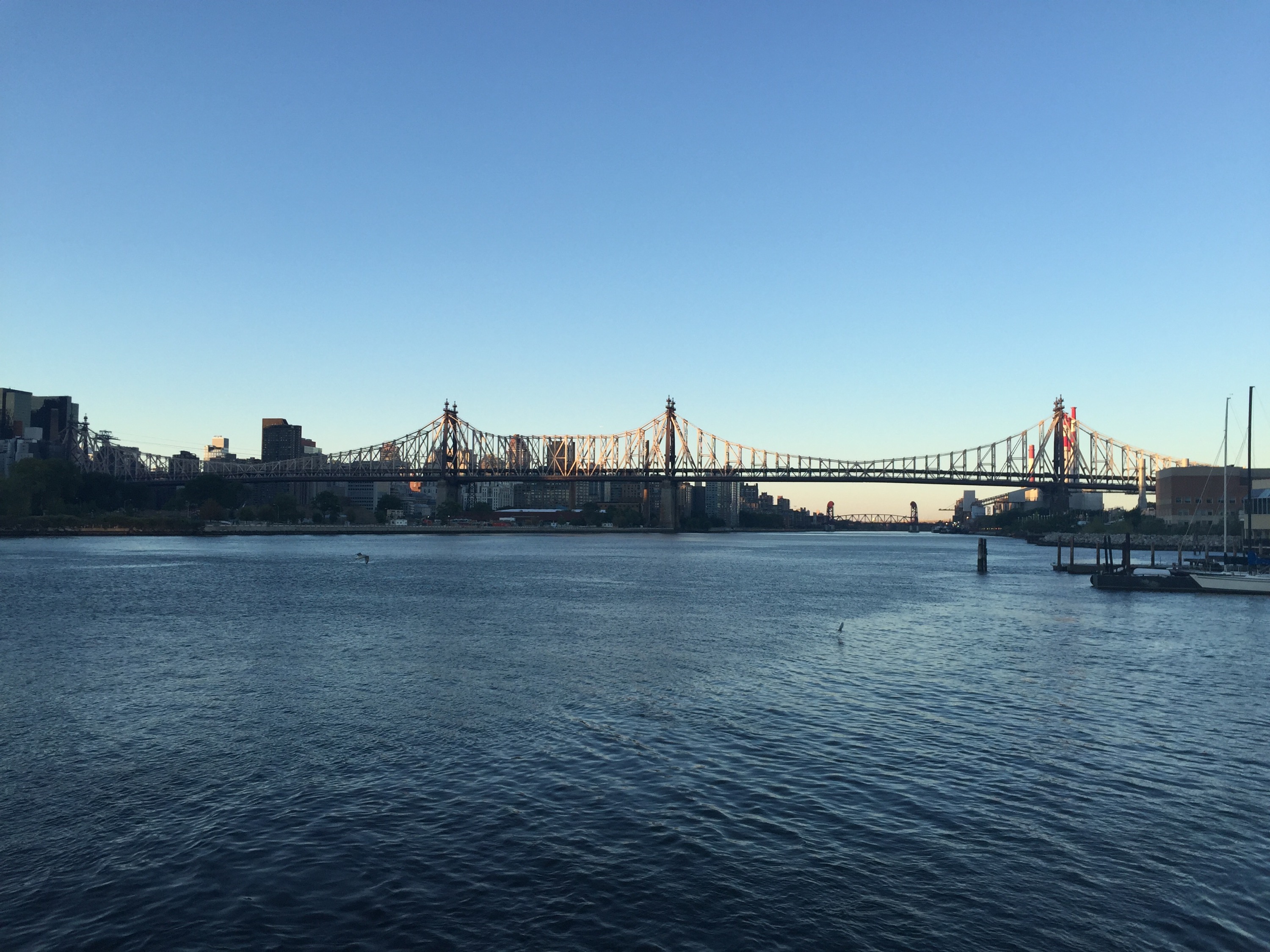 Last week I wrote on Twitter that even when I’m escaping, I feel like I am plotting my escape.

This evening I went running along the East River during sunset.

While following the glittering skyline, I was thinking about writing and had a country music playlist playing on repeat. I felt distracted by all the lyrics about love lost, so I started listening instead to On Being’s interview with Maria Popova, Cartographer of Meaning in a Digital Age.

I think a lot about this relationship between cynicism and hope. And critical thinking without hope is cynicism. But hope without critical thinking is naïveté. And I try to live in this place between the two to try to build a life there because finding fault and feeling hopeless about improving our situation produces resignation of which cynicism is a symptom and against which it is the sort of futile self-protection mechanism.

But on the other hand, believing blindly that everything will work out just fine also produces a kind of resignation because we have no motive to apply ourselves toward making things better. And I think in order to survive, both as individuals and as a civilization, but especially in order to thrive, we need to bridge critical thinking with hope.

I struggle with the feeling of both types of resignation that Maria mentions.

This morning at about 5AM while in bed and looking out the window in a different city, I watched the sun leisurely begin to appear.

I experienced the rare luxury of falling back asleep and dreamed a hundred dreams before fluttering my eyes open to the height of the sunrise. Maybe it all happened in a matter of minutes, but I felt this “uninterrupted intimacy” of that space in time. Despite the earlier pervasiveness of various worries that tend to inundate my mind, I tried hard to consciously make room and invite in the contentment and magic of the room bathed in white and orange light.

[The best of ideas] came to me at the gym or on my bike or in the shower. And I used to have these elaborate theories that maybe there was something about the movement of the body and the water that magically sparked a deeper consciousness. But I’ve really come to realize the kind of obvious thing which is that these are simply the most unburdened spaces in my life, the moments in which I have the greatest uninterrupted intimacy with my own mind, with my own experience. And there’s nothing magical, at least not in the mystical sense, about that. It’s just a kind of ordinary magic that’s available to each of us just by default if only we made that deliberate choice to make room for it and to invite it in.

Towards the end of my run, I watched a bird in flight skim the air just above the water. I smiled. The graceful and joyous occupancy of the space and time between earth and sky.

We never see the world exactly as it is because we are how the world is. Was it — I think it was William James who said, “My experience is what I agree to attend to, and only those things which I notice shaped my mind.” And so in choosing how we are in the world, we shape our experience of that world, our contribution to it. We shape our world, our inner world, our outer world, which is really the only one we’ll ever know.

And finally, Krista Tippett asks “How do you measure success in any given day?” and Maria responds:

Well, once again, I am going to side with Thoreau. And he said something like, if the day and night are such that you greet them with joy, and life emits a fragrance like flowers, it’s more elastic and more starry and more immortal, that is your success. And for me, that’s pretty much it — waking up and being excited and curiously restless to face the day ahead, and being very present with that day, and then going to bed feeling like it actually happened, that the day was lived. I mean, there’s nothing more than that, really.