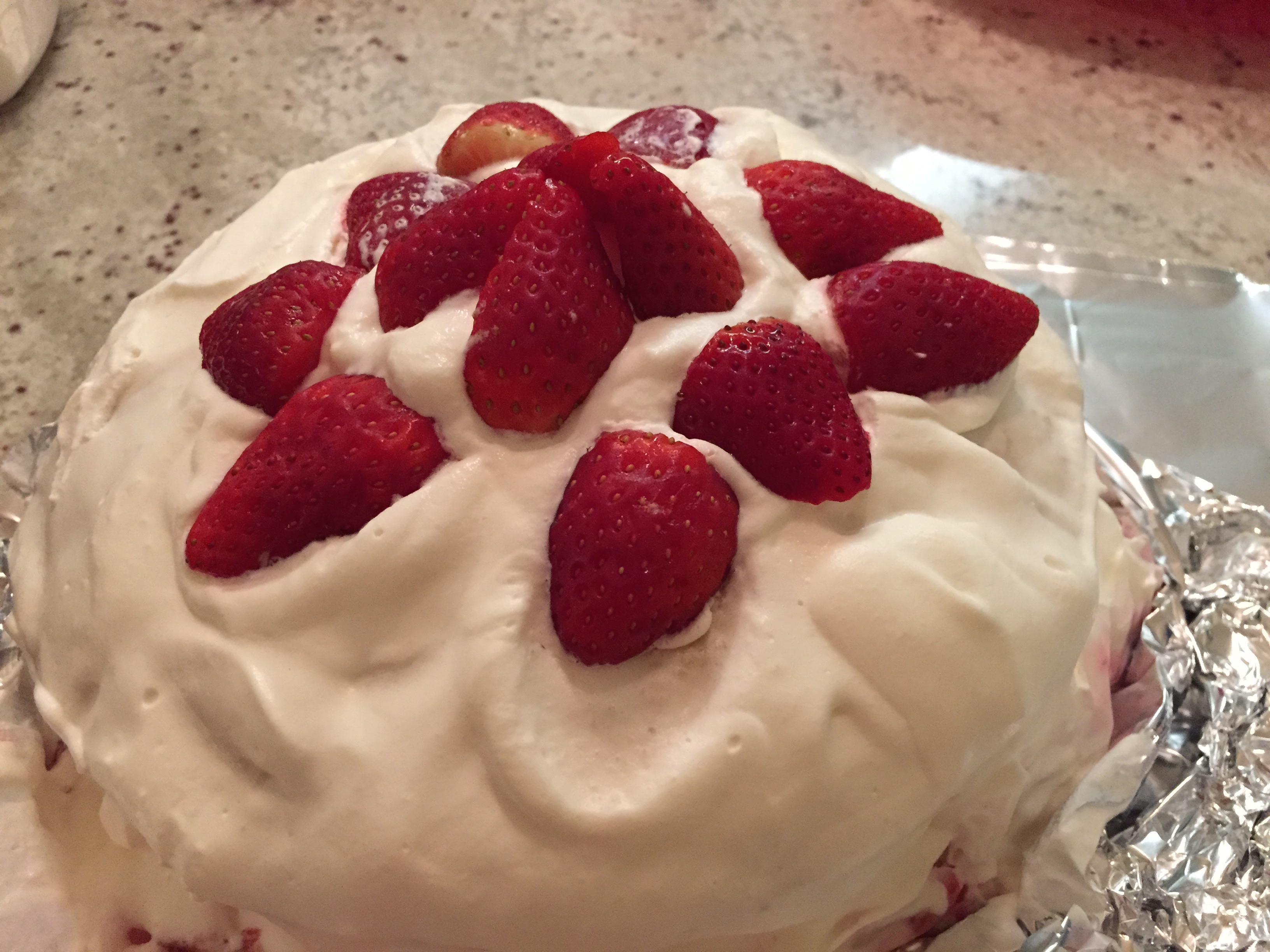 I don’t admit often on this blog how incredibly non-domestic I am. last year I made an awful attempt at a vegan cooking and food blog that died shortly after its birth. In college, my roommate and I attempted a blog about food that eventually only contained entries by me. No one really knew about either of these blogs.

I still attempt every now and then to putter around the kitchen:

the thing about how i blog about food and cooking is, well, i just like the realness of it. no, i am not going to use my fancy Canon DSLR and special lighting tools to shoot staged photos of everything perfectly placed on a rustic kitchen table. am i a fan of it? of course! i have amazing friends (like Joy) who do a fantastic job and are experts at it. but this? this is everyday sh$t, y’all.

This week I made an attempt at a Swedish Birthday Cake, which is fluffy, white, messy, and very very strawberry. and very not dairy-free. It’s freezing, dreary, and sad outside, so I thought a post about a fluffy and hilarious attempt at baking would lighten the mood so to speak. I will even use somewhat correct capitalization in the recipe, which I always think I should do, but I always forget in my blogging haste.

Some people think that because I dance occasionally, I should be a graceful person. but I have been known to be quite clumsy.

In a similar fashion, I somehow miraculously can fool some people into thinking that I am organized and very prepared, but often I like to be spontaneous and think of crazy ideas like making a rather elaborate layer cake from a country I’ve never visited when I don’t even have any mixing bowls in my apartment (more on this later). In this particular example, I ran around Manhattan for several days trying to collect various items Ineeded.

I have to admit at this point that I only did all this after doing a thorough Google search to see if any Scandinavian bakeries make this kind of cake, so that I could pay money for one of these stupid cakes instead of doing all this. Rest assured, none exist in New York City at this time.

This recipe is loosely (ok maybe shamelessly adapted) from polkabecky’s no-longer-updated blog. Her recipe post won out against everyone else’s because 1) it was not in Swedish, which is one of the few languages i don’t speak or understand (that was sarcasm), and 2) because I fell in love with her line about “throw[ing] back a few shots of Aquavit and sing a rousing chorus of Helan går” while the cake cools.

It’s super unfortunate that i found out that she is a Texas Aggie (I’m a Longhorn), but I forgive her because she is apparently also an awesome female Linux hacker.

So I admit I didn’t drink Aquavit in the process, but I did do some very rousing karaoke sing-alongs to my Spotify playlist. most notably, Avicii songs, so that totally counts as Swedish, right?

I also made the yellow cake from scratch. Yes, yes I did. hook’em.

The yellow cake part is from one of my many cooking secret crushes (and yours, i’m sure), smitten kitten. Also, if you are less of an idiot masochist than I am, you can totally use some Duncan Hines boxed cake mix, I won’t tell the Swedish grandmothers.

Preheat oven to 350°F. Butter two 9-inch round cake pans. (I totally made a second trip for butter and another cake pan, which I forgot to get the first time. You don’t want to know about the third and fourth trips). It’s totally OK to only have one cake pan, it will just take much longer to bake and have both layers cool thoroughly. Also, my roommate asked why I didn’t do just one layer. You’ll see why when we get to the frosting part.

Mix flour, baking powder, baking soda, and salt in a medium bowl. In a large mixing bowl, beat butter and sugar in a large bowl with an electric mixer at medium speed until pale and fluffy, then beat in vanilla. Add eggs 1 at a time, beating well and scraping down the bowl after each addition. At low speed, beat in buttermilk until just combined (mixture will look curdled). Add flour mixture in three batches, mixing until each addition is just incorporated. (I was insanely nervous during this process).

Spread batter evenly in cake pans. (I don’t measure much, so I just aimed for it to look rather equal). They always warn you not to eat raw batter. So of course I licked all the batter off of everything. All clean. Put it in the oven.

Here was my favorite line:
While the cake bakes, throw back a few shots of Aquavit and sing a rousing chorus of Helan går. If you skip this step, it’s not really Swedish cake.

Bake until golden or a wooden pick inserted in center of cake comes out clean (I totally used disposable bamboo chopsticks here- you can probably see the gaping hole in the center of my cakes), 35 to 40 minutes. Cool for 45 minutes to an hour.

1.5 lb fresh strawberries, hulled and rinsed. It’s OK if they’re slightly damp.
5-6 nice-looking strawberries, sliced in half top to bottom (these are decoration for the top of the cake)
2 1/3 cups heavy whipping cream
1 tablespoon powdered sugar (AKA confectioner’s sugar – do not use granulated sugar)

Put the strawberries into a blender and pulse. Not too much. You can also use a fork if you don’t have a blender or a food processor, or if you just want more arm exercise. My smashed strawberries looked like this:

Remove the empty bowl from the freezer, add 2 1/3 cups of cream and 1 tablespoon of powdered sugar, and beat for 2-3 minutes until soft peaks form. Feel free to dip and eat some strawberries in powdered sugar if any falls on the counter (don’t worry, I Clorox my counter semi-often). I was also insanely nervous at this point. I was using a hand mixer, and I don’t do dairy, so what the hell are soft peaks? According to polkabecky: “Depending on a number of factors, the amount of time this takes will vary. Do not walk away at this point. Stand there and stare maniacally at the mixer, and stop it the minute soft peaks start to form. It only takes moments to go from lovely whipped cream to something chunky and buttery.”

Once the cake has cooled, put the bottom layer on a cake plate (flat side down) and spread as much of the strawberry/whipped cream mixture on top as you can reasonably get to stay put. I made a tiny mistake here. I tried to put strawberry mixture ALL OVER the bottom layer, and it oozed out over the sides in a sloppy mess.

So this is what it looked like when I put the second layer on it (flat side down):

I swear to you that is what a strawberry shortcake burger would look like. I mean, but I bet it made it taste twice as good. The strawberry layer is super crucial to a good Swedish Birthday cake! This is why you can’t really cut corners and make it only one layer, even if you REALLY want to.

I proceeded to frost the rest of the cake with the regular whipped cream. I put lots and lots of whipped cream to cover my mistake, and it kind of worked. The recipe actually yields a LOT more frosting than you need, but it’s kind of fun to offer your friends and roommates fresh whipped cream and strawberries later so no harm done. I even considered making more cake but… that didn’t happen.

If you’ll notice, I didn’t actually have a cake pan. oops. My cake is actually sitting on a piece of wax paper that is sitting on top of a large tupperware lid. You can thank my mother for my resourcefulness.

I proceeded to decorate the top of the cake with strawberry halves. Push down on the strawberries because yes, that whipped cream is like a slip ‘n’ slide. Many of mine slid off before I learned my lesson. Put it in the refrigerator and let it sit overnight because then it soaks up the strawberry juice and gets more delicious. According to polkabecky: “A word of warning: whipped cream will pick up any smells in your refrigerator. If you’ve got garlic beef in there, your cake will taste like garlic, no matter how well you cover it. So make sure your refrigerator isn’t going to impart stink to your cake, and make sure the cake is covered while it’s in the refrigerator.”

On frosting it- I am a strange mixed breed of perfectionist and “oh, what the hell, who cares?” So, as Becky wisely says: “You can spend a bunch of time trying to make the whipped cream look perfect, but the cake will be devoured in moments, so I don’t bother (ok, and I don’t have a single artistic bone in my hard cold scientific body). Also, the whipped cream should be really soft at this point, and will want to ooze about. It will set up a bit once it’s been refrigerated overnight.”

So, I finished the cake. my roommates came home to me fretting over how to transport it in New York City. this, my friends, is a daunting task when you are a Texan who suddenly has no car to rely on. My roommates also commented that they had never baked ANYTHING in their lives, not even anything that came out of a Betty Crocker box. (hence the lack of mixing bowls and cookware in my home). So at the very least, I beat two girls on this world at baking!

I spent a good part of the evening feeling kind of anxious that the cake did not actually fit in the “cake carrier” I bought (ok, that was the fourth trip).

I will not impart my secret on how I ended up hijacking a solution to this issue, but rest assured, if you knew, you’d thank my mother a second time for my resourcefulness.

Skål, my friends. stay warm in this frigid January weather, and if you want to eat homemade whipped cream and strawberries, I have lots of leftover frosting in my fridge.

p.s. after all that, i didn’t taste my cake because there was enough butter and cream to kill a lactose intolerant Asian or two. however, the Swede said that it tasted and looked *just* like home. and proceeded to eat 3 slices of it in one sitting, i’m not even exaggerating. i fell in a relieved heap of gratitude for this. there was a feeble attempt to teach me how to say “Jordgubbstårta” but i will continue calling it Swedish Birthday Cake. thank you.